The Powerhouse Museum remains under threat from the cultural vandalism of the NSW Government.

Six weeks ago the museum’s supporters were celebrating Premier Gladys Berejiklian’s backflip decision to retain the museum at Ultimo. But the backflip has turned into a 360-degree somersault.

Staff are under instruction to continue packing up the collection at Ultimo, and now a parliamentary inquiry has heard that there are grave risks to the State’s heritage. The government’s about-turn even poses threats to life and limb.

It has become apparent that Arts Minister Don Harwin – reinstated to the role just a day before the Premier’s 4 July announcement – is pushing ahead with three of the most contentious aspects of the government’s original plan: dispersal of the collection; demolition of a crucial part of the Ultimo complex; and the construction, on the Parramatta flood plain and over the wreckage of heritage buildings, of an edifice unfit for purpose as a museum.

On Friday 21 August an array of expert witnesses, including some of Australia’s most distinguished specialists, lined up to give evidence of the flaws in the plan to an Upper House select committee inquiry. Their considered, meticulously documented testimony was compelling to watch. 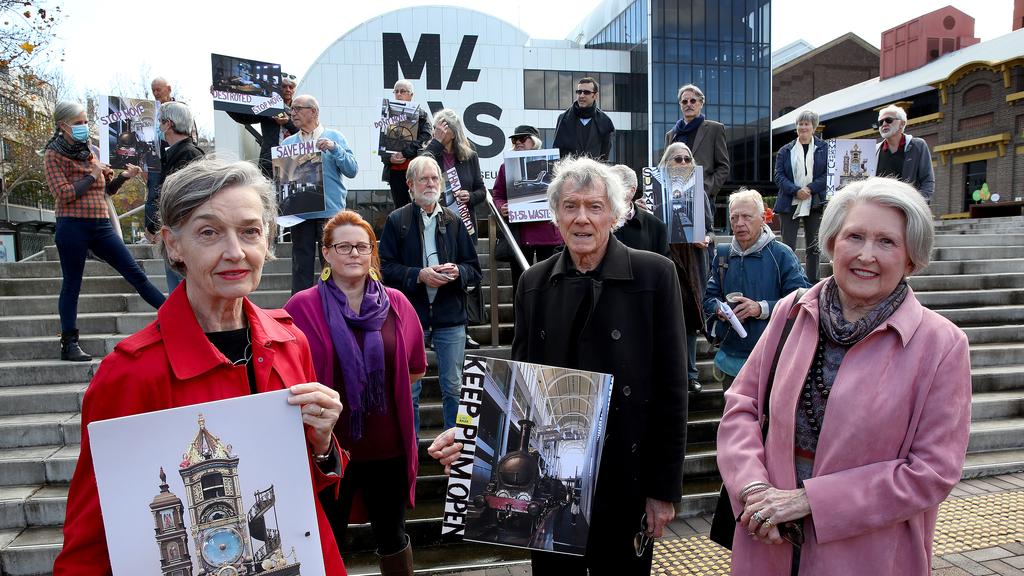 Jennifer Sanders, left, and Lionel Glendenning, centre, during the campaign to save the Powerhouse

Former deputy director Jennifer Sanders, a singularly dignified speaker, appeared to be overcome while patiently explaining the significance of the collection in telling people’s stories and preserving the legacy of previous generations for those of the future.

In an emotion-charged moment she halted, paused, recovered and then departed from her prepared statement to say: “After 4 July we thought sanity had prevailed. We thought we’d found we had a government that valued our heritage. Instead we have insanity. I can’t tell you the damage the past six years have done… The museum is about inspiring people to think about the world so that it can become a better place. I am gobsmacked to be part of a state where this is not understood.”

Former director Dr Lindsay Sharp said the Parramatta plan showed “ignorance on a breathtaking scale”. But he was primarily concerned with the changes at Ultimo, where new evidence from his recent meetings with government suggested that most of the collection will still be removed and at least one of its key buildings will still be demolished. 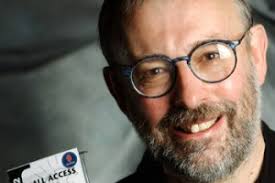 The Harwood building is the historic tram depot, home of Sydney’s first modern intra-urban transport system, and was repurposed for the museum under the premiership of Neville Wran. Today it is the nerve centre of the entire operation, housing collection storage adjacent to conservation workshops, curatorial offices and display areas. Close proximity of these key departments to the collection makes for efficient, low-cost, high-quality management of core functions.

The award-winning Wran building and its Galleria, designed by architect Lionel Glendenning who also gave evidence, is excluded along with the Harwood building from the government’s heritage list. What will be left at Ultimo, it appears, will be the turbine, boiler and engine halls, housing just three of the very large objects that caused such public concern in the campaign to save the museum: the Catalina flying boat, the Boulton & Watt steam engine and Locomotive No.1. Without the rest of the collection they will be bereft of the context that enables the museum to tell the story of how the first industrial revolution transformed society.

Most of the collection is destined for the Castle Hill storage facility, rebranded under Arts Minister Harwin as a Museum Discovery Centre but lacking the specialised workshops and offices currently in the Harwood building.

“In its 4 July statement,” said Dr Sharp, “Government let it seem that these facilities and object zones along with their collection contents and functionality would be retained and rejuvenated.”

Asked if the 4 July statement had been misleading, Dr Sharp said that it had been more a matter of half-truths.

He estimated that the true costs of the entire operation, to which he first alerted the previous inquiry, had now risen to around $2 billion.

Dr Sharp and Ms Sanders gave the lie to the claim that the Powerhouse Museum was old-fashioned and out-of-date. Its digitisation program, begun in 2005, had won the gold medal from the American Museum Association, one of many awards.

Other witnesses included some of the country’s most experienced curators and academics in the fields of science and technology. Ian Debenham OAM, for 30 years curator of transport, gave evidence of the irreparable damage that could be done to the 183-year-old Maudslay steam engine if it were moved as planned. Specialist historian Dr David Philip Miller said that the collection was crucial to showing how steam power transformed modern society: “If the very large objects are stripped of context, you can’t appreciate that.” The museum’s story was of the greatest relevance to new generations whose lives are once again being transformed by technological development. 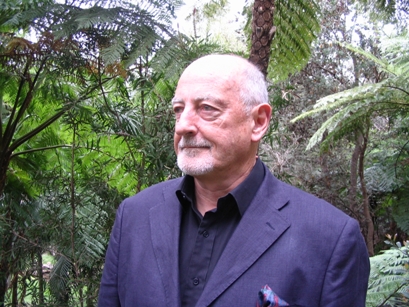 Dr Des Griffin, for 22 years director of the Australian Museum, has spent decades studying museums around the world. He said that the Parramatta plan did not have sufficient space for a multi-purpose institution. Staff had not been consulted about the plan, whereas “successful museums are those where staff are critically involved” and where boards asked staff to find solutions to problems. (Deputy chair of the inquiry, Greens MLC David Shoebridge, had already noted that a People Matter staff survey had shown satisfaction with the changes at 20%, the lowest he had ever seen.)

“On the [Powerhouse/MAAS] board,” Dr Griffin said, “there is no one with any experience or knowledge in any field that bears on the museum and its development.”

But the bombshell of the day came in evidence from museums consultant Kylie Winkworth, author of multiple detailed papers about the problems with the proposed Parramatta building, which she has described as more an event venue than a museum. The design, she revealed on Friday, involves not only risks to collection objects but serious risk to lives in the event of flood.

Concerned as museum professionals with visitor safety, members of the Powerhouse Museum Alliance had commissioned the report the government failed to ask for, from leading flood plain management specialists Molino Stewart. It has substantiated fears of risk to life previously expressed by hydrologist Dr John Macintosh and by Parramatta Council.

The Molino Stewart report, which considered the impact of the February 2020 flood, notes that the site is likely to experience flood depths of up to half a metre – more than enough to sweep people away – as often as every year. With an estimated two million visitors a year, the new facility would face insuperable evacuation problems. The undercroft, a likely place of refuge, could become engulfed by rising waters as debris piled up against the fence, while the evacuation route involved moving people down towards the river and then upwards, in a passage just nine metres wide, against down-rushing storm water.

Steven Molino, one of the report’s authors, gave evidence that storm water did not need to be deep to sweep people away – a fact still not generally understood – and that small children and people with mobility issues were at particular risk.

Lionel Glendenning called the report “an indictment. As an architect I would not proceed further.” 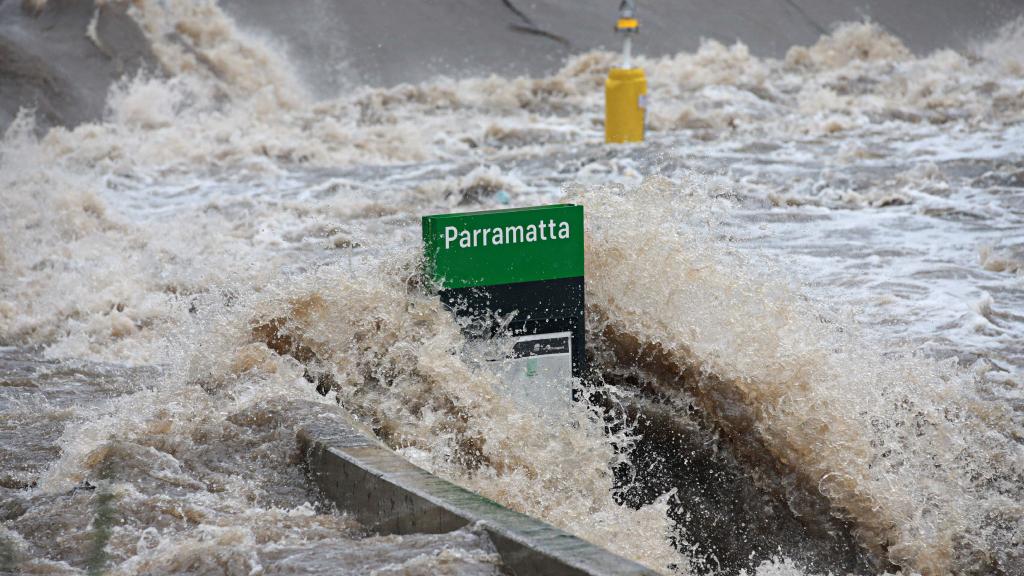 “We’ve seen Toowoomba and the Lockyer Valley,” Ms Winkworth said. “These things are happening – one-in-a-hundred-year events every year. My nightmare as a museum person is that there would be a serious flood event and we would be facing an inquiry. We couldn’t say we didn’t understand the risks.”

The professional witnesses have gone to extraordinary lengths, over almost six years, to explain the case against the government plan. They have been at pains to show the relevance of the steam-era industrial revolution to the great technological and social changes of today. Under questioning Dr Sharp admitted that he had spent more than 4,000 hours documenting evidence and attending meetings, on a purely voluntary basis. Ms Winkworth would have done the same.

The professional experts have written and commissioned endless reports. Their patience has been sorely tried but they are still not rabble-rousers: “We want to help,” said Dr Sharp.

They are all in favour of a properly planned museum for Western Sydney – preferably of the area’s rich history, pre-and post-colonisation, and preferably on the Fleet Street heritage precinct, the 26-hectare, flood-safe site that is home to the historic Cumberland Hospital, formerly the Parramatta Female Factory. It’s a site large enough to encompass its historic buildings and a new, purpose-built institution, with plenty of green space in between.

In this they are supported by Suzette Meade, leader of the North Parramatta Residents’ Action Group and the youngest witness to front Friday’s hearing. It was she who enlisted the support of the building workers’ union CFMEU which in July placed a Jack Mundey-style Green Ban on Willow Grove and St George’s Terrace, the heritage buildings scheduled for demolition to make way for the government’s project. She now has the backing of the NSW Nurses and Midwives Association, has 14,000 local signatures on a petition supporting the alternative Fleet Street heritage site, and 3,600 people committed to supporting the Green Ban. 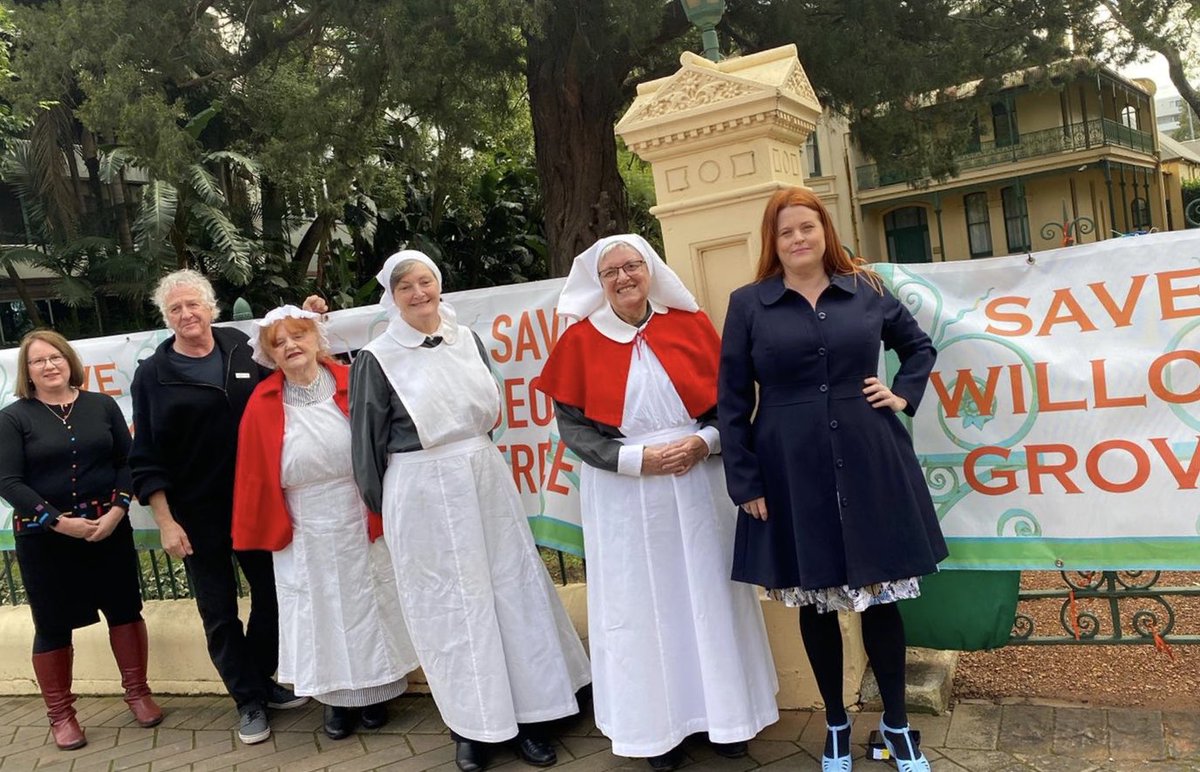 Suzette Meade with nurses and midwives campaigning to save Willow Grove

Community consultation, she said, had been entirely inadequate. People at tick-the-box consultations were “overwhelmingly” in favour of a museum of local history, but “opposition was silenced”.

Meeting with Treasury officials in April 2020, Ms Meade said she had been asked to propose an alternative museum plan, which she duly presented. Asked for a business case, she turned to the museum professionals. Together they built a business case demonstrating that a museum could be constructed on the Fleet Street heritage site for $450 million, rolled out over four years. Planning Minister Rob Stokes had nonetheless failed to respond to her eight requests for a meeting.

She would in any event be putting her body on the line, she said, along with many of her supporters, to stop demolition of Willow Grove. Owned by successive generations of local businesswoman, it is the only Victorian Italianate villa left in Parramatta.

It was a parliamentary hearing like no other – when available, the full transcript will be worth reading here. Credit is due to the inquiry’s chair Robert Borsak of the Shooters, Fishers and Farmers Party for pursuing the investigation, and to David Shoebridge (Greens) and Walt Secord (Labor) for their carefully aimed questions. Liberal and National MPs spent most of the day looking at their mobiles and laptops and asked no penetrating questions.

At the end of the day I was left wondering: What kind of government wilfully ignores mountains of evidence of such gravitas, and the voices of such knowledgeable, public-spirited people? In what kind of society can members of a museum board get away with saying: “Heritage is old-fashioned”? And what are the secret deals with developers to which the Berejiklian Government is clinging at such cost to the public purse and to the heritage of NSW?

Australia is a founding member of UNESCO. Under resolutions of that body, governments of member countries are obliged to ensure the four basic functions of museums: preservation of collections, research, communication and education. The NSW Government is breaching all four commitments. It’s time to call a halt.

Arts Minister Don Harwin, it was reported to the inquiry, claimed in a recent meeting that the government’s plan was not his; he’d merely inherited it. The solution is simple: halt the current plan, leave the Powerhouse intact at Ultimo, and go back to the drawing board to give Western Sydney a first-class institution: the first ever Museum of NSW on the Fleet Street precinct heritage site.